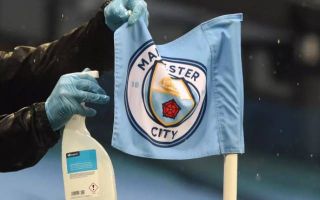 According to The Athletic, Manchester City’s upcoming clashes with Chelsea and Manchester United are at this point unlikely to take place.

City were due to face Everton at Goodison Park yesterday evening, but the game was postponed at the eleventh hour after, as The Athletic report, the number of positive cases within the City squad rose to four.

Pep Guardiola’s side already had a game in hand over their rivals in the Premier League, so having another will even further reduce how representative the league table is.

MORE: Will the Premier League be suspended again as COVID-19 infections rise?

Unfortunately for City, as The Athletic report, their upcoming clashes with Chelsea and rivals Manchester United in the Premier League and Carabao Cup respectively are now in doubt.

Although, The Athletic do report that, even with City’s training ground shut at current, if it is able to re-open before the game against Chelsea, they could be forced into playing the fixture.

This is the kind of disruption everyone signed up for when they agreed to reboot Premier League football in the midst of a pandemic. Let’s just hope the outbreak in the City camp goes no further than it already has.