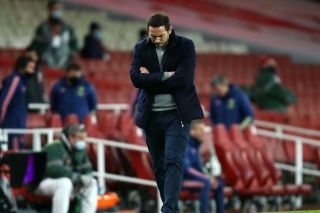 We’ve all been there in Football Manager after a dreadful performance when it’s time to get angry with the players at half time, but it looks like Frank Lampard went for a real-life version of that approach in Chelsea’s recent defeat to Arsenal.

Obviously the approach didn’t work as Arsenal went on to win the game comfortably, while the situation perfectly reflected what happens in the game as the details were somehow leaked to the press and reported by The Athletic via SI.

It’s interesting to see that Lampard has had to resort to these measures to try and get a reaction from the team because you wouldn’t regard him as a soft touch, but he really doesn’t come across as the type of manager who would lose it on a regular basis.

Chelsea fans will feel the response was merited as they somehow managed to lose to an Arsenal team who were utterly hopeless until that game, but it could also suggest that Lampard is quickly losing patience with some of his players.

The jury is very much out when it comes to Lampard’s management of the club with supporters split on blaming the players or the boss, but there’s only so many times you can throw millions of pounds at the team before the manager has to take some of the blame.

Lampard currently has the look of a manager who is out of ideas so he’s trying absolutely anything to get a reaction from the squad, but he really needs to get a win against a depleted Man City side next time out…. if the game is cleared to go ahead.