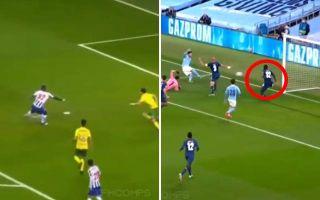 Several of Chelsea’s summer signings have made a considerable difference this term, despite their recent wobble, but they have another who Blues fans might not have seen play just yet.

To name a few, Edouard Mendy, Ben Chilwell and Thiago Silva have already begun to justify Chelsea’s decision to sign them over the summer transfer window.

Frank Lampard dipped into the market, making the most of it having been banned from doing so the summer prior, and took his opportunity to strengthen his squad.

However, there’s one man, Malang Sarr, who Chelsea fans may have forgotten they signed. On-loan at FC Porto, Sarr is making quite the impression. Have a look at this compilation, created by TFM, which shares some of Sarr’s best moments in a Porto shirt to date.

Chelsea’s back-two is pretty settled at current, but when they do find themselves in need of a new centre-back, they ought to look no further than this man. He looks like he good be the real deal, at only 21-years-old!