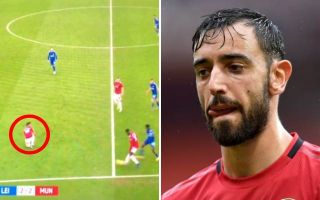 Bruno Fernandes is not only a world-class midfielder, he also appears to have magical healing powers.

The Manchester United talisman has been the star of the Premier League season so far, and his acquisition is fast looking like one of the most astute pieces of January business in the competition’s history.

The Portuguese’s latest moment of brilliance came at the King Power Stadium at the weekend, with Fernandes scoring United’s second goal in a 2-2 draw with Leicester City.

However, despite Fernandes arguably being man of the match (again), he did disgrace himself with an embarrassing moment of play-acting in the second-half of the game.

Have a look at this clip below. Fernandes is on the turf, feigning injury, before magically recovering in a split second in time to receive the ball when it is passed in his direction.

A great player he may be, we have no time for behaviour like this.