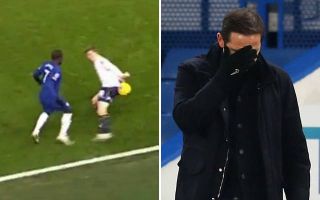 Should Aston Villa’s equaliser against Chelsea at Stamford Bridge on Monday night have been disallowed? There does appear to have been a handball in the build-up…

Chelsea have been enduring a pretty torrid time of late. A victory over Aston Villa, who are looking like genuine title challengers, would have been more than welcomed.

Unfortunately, the in-form El Ghazi found the back of the net to cancel out Olivier Giroud’s opener, meaning the spoils were shared under the lights at the Bridge.

However, could the goal have stood? Was there a handball in the build-up? Could VAR have intervened?

I was wondering if anyone could explain the handball rule to me? from r/chelseafc

While the ball does make contact with Matt Targett’s hand, with the progression of the pass being halted, his hand was not in an unnatural position when it hit it.

It would be up for the referee to decide whether it was a free-kick or not, but the incident does not appear to have been spotted by the match officials anyway.

Aston Villa did go up the other end of the pitch and score, but there were too many phases of play in-between the contact with Targett’s hand and the finishing touch from El Ghazi, meaning VAR could not have intervened.

It’s hard to think many Chelsea fans will be left feeling aggrieved over this.