The list of players out of contract in the summer of 2021 is as star-studded as it has perhaps ever been. Who does your club need?

The transfer window is oftentimes one of the most exciting periods of the year for football fans. The prospect of what additions your club will make to their respective squads can prove to be thrilling.

There’s nothing quite like the feeling when a deal’s announced, too. After all the talk, all the speculation, there he is holding the shirt and ready to fight for your team’s cause.

MORE: See all the latest transfer news and gossip here

What’s extra sweet is when your club are able to get the players they desire without breaking the bank. Such is the case with the Bosman rule in force, you can actually get them without paying a penny.

As players enter the final six months of their contract, they’re free to talk to prospective clubs in January over the possibility of penning a pre-contract agreement ahead of a summer move.

With January just two days away, now is the time to look at that and consider who could be signing along the dotted line this winter – and this year’s list is pretty impressive.

Here’s the pick of the players from around Europe who will be able to move for free in the summer, thus free to talk to your club in just a few days time. Who do you want to see signed? 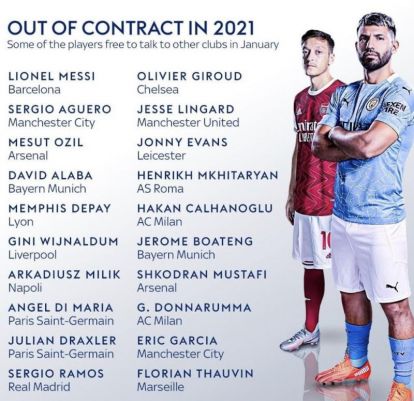 Naturally, your attention would be captured by the stars of Barcelona, Real Madrid and Bayern Munich included in this list. While there’s world-class players soon to be available elsewhere, these are genuine world-beaters who could be signed on a free.

At Barcelona you have Lionel Messi, at Real Madrid you have Sergio Ramos, with Bayern Munich defensive duo David Alaba and Jerome Boateng both soon to be available.

These three sides are considered the pinnacle of football, with the players they possess coveted by virtually every club imaginable – those four will soon be available for free!