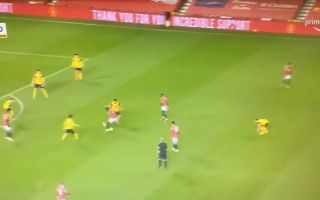 The centre-back, who returned from injury recently and has now completed the entire 90 minutes in each of United’s last three games, produced another hilarious moment like the one vs Leicester.

Bailly pressed forward to help knock the ball into Paul Pogba’s path, with the Frenchman then laying it back to the defender.

Bailly got himself out of danger and ensured United kept the ball by returning the ball to Pogba with a sideways backheel pass. Only the ex-Villarreal star could produce something so unorthodox yet perfect.

Bailly managed to produce a moment like this whilst also turning in a solid display for Ole Gunnar Solskjaer’s side, if the injury-prone Ivorian can remain fit he may well displace Victor Lindelof.