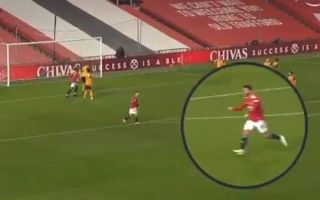 United battled hard against Wolves, an opponent who oftentimes do well in terms of restricting the Red Devils’ opportunities. Contests between these two Premier League sides do not tend to provide a great deal of entertainment.

Last night’s clash was no different, with Rashford’s 94th minute goal the only real moment of note – but it was a significant one none the less for Ole Gunnar Solskjaer and co.

MORE: Ole Gunnar Solskjaer reveals whether he believes Manchester United are in the title race

As Rashford found the back of the net and subsequently secured Man United all three points, the players knew that they would be finishing the year in second place in the table, just two points behind leaders Liverpool.

One man who was clearly delighted with that fact was Bruno Fernandes, who at times has looked intent on leading United’s title charge on his own.

Have a look at how Fernandes reacted when Rashford netted late on against Wolves last night, with pictures courtesy of Amazon Prime.