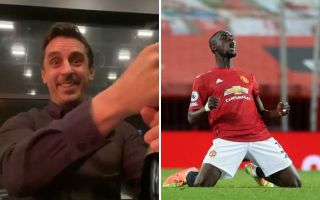 Manchester United Gary Neville has taken to Twitter to celebrate after the Red Devils drew level on points with Premier League leaders Liverpool.

Being mathematically second wasn’t going to dampen Neville’s spirits, though. The Sky Sports star watched the contest from the commentary position this evening, before getting the celebrations underway post-match.

Soon after the full-time whistle had blown and Man United moved up to second in the Premier League table, Neville took to Twitter with a quite hilarious clip of him opening a bottle of champagne.

He knows better than most, though, that there’s no prize for being in second place, nor is the Premier League decided by how the table stands on New Year’s Day.

There’s still plenty of work left to be done…