Karen Carney has been the talk of the town of late, with that Leeds United tweet polarising the English football community.

Carney, a pundit for Amazon Prime Sport’s Premier League coverage, suggested that Leeds only managed to gain promotion from the Championship as a result of football being halted by the COVID-19 pandemic.

It’s safe to say the club’s social media team were not particularly fond of her comments. 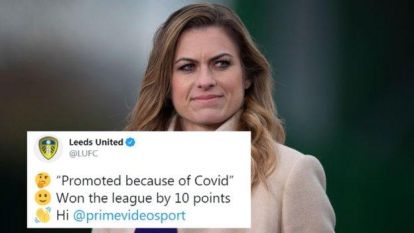 As a result of the uproar caused by her comments and the spotlight shone upon her by Leeds, Carney was forced to delete her Twitter account in order to escape the abuse.

While it fine to disagree with Carney’s comments, sending her abuse via social media is going to achieve nothing but cause further distress to her.

Those not familiar with the women’s game may not have even been aware of Carney or her story prior to this incident, but it’s not the first time she’s brought unwanted attention to herself.

As reported by the Daily Mail back in 2014, Carney was fined by the FA after an investigation found her guilty of misconduct for using abusive and/or insulting words towards an opposing player.

The report mentions that Carney was accused of telling Bristol’s Natalia Pablos Sanchon to “f*** off back to Spain”, something she contested, claiming that she merely told her to “go back to Spain”.

Either way, it was hardly a comment made with good intention from Carney. She landed herself in hot water with English football’s governing body as a result.

While their is no risk of punishment in this case, with Carney not being guilty of any wrongdoing at all, it’s another example of how her choice of words has drawn unwanted attention to her.