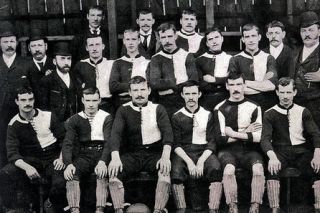 Manchester United face Aston Villa at 8pm tonight. The game is another in a long line of New Year’s Day contests involving the Red Devils, the first of which took place in 1895.

Still under the original name of Newton Heath, which later became Manchester United in April 1902, the Reds’ first taste of New Year football was against Burslem Port Vale at the Manchester club’s home ground of Clayton.

In the first half, Newton Heath had the best of the play and two goals from Millar gave them a 2-0 lead going into the break. The second half was more evenly contested, but the Heathens as they were known, scored a third through Rothwell.

In the latter stages of the match, Port Vale’s goal was “warmly assaulted”, in the words of the Sheffield Evening Telegraph (1 January 1895 edition) and Newton Heath ran out comfortable 3-0 winners.

It was a welcome league victory for the club who would later become one of the biggest teams in the world. In the eyes of the supporters, they had certainly made up for the trouncing in the reverse fixture, when Burslem Port Vale thrashed Newton Heath 5-2 at Moorland Road on Christmas Eve (1894).