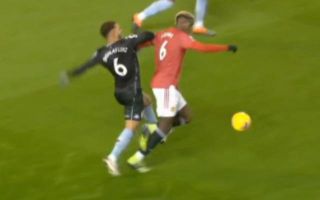 Manchester United were awarded a second-half penalty against Aston Villa this evening, but was it at all justified?

We would prefer not to focus on dodgy officiating by those on the field and watching via VAR in wake of what was a brilliant game of football, but this is just too difficult to ignore.

Paul Pogba fell to the floor under challenge in the Aston Villa penalty area, with VAR looking multiple times at the replay before awarding a penalty, which was converted by Bruno Fernandes.

The issue is – Pogba came under challenge from himself. The Frenchman appeared to trip himself before falling to the floor and tricking the officials into awarding a penalty.

Take a look for yourself.

?? What a fantastic move by Paul Pogba to give Manchester United a penalty! ??? #MUNAVL pic.twitter.com/1bFBsoSWUL

Pictures courtesy of the Premier League

VAR was brought in to assist referees to come to the correct decisions, but here, after viewing the incident several times in slow motion, it’s come to the wrong one.

Pogba clearly trips over his own leg in a blatant attempt to win a penalty for his side – and when referees continue to reward players from cheating in this manner, who can blame him?