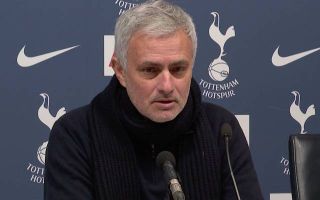 Jose Mourinho appears to be incredibly disappointed with Sergio Reguilon, who he gifted a suckling pig before discovering that he had broken coronavirus rules over Christmas.

As reported by Sky Sports earlier today, Reguilon was one of three Spanish speaking Tottenham players who were discovered to have broken coronavirus rules over Christmas.

Tier 4 restrictions in London prevented multiple households from mixing over Christmas, but those involved clearly had little regard for the rules and the purpose they serve.

Speaking in wake of Tottenham’s win over Leeds United this afternoon, Mourinho revealed his disappointment with Reguilon. His words sound as though they come from a man whose feelings have been hurt – and understandably so.

It’s not often that Mourinho gets the neutral’s sympathy, but in this case, he’s been wronged by Reguilon after attempting to make him feel better over what should have been a lonely Christmas period.

Have a heart, Sergio…