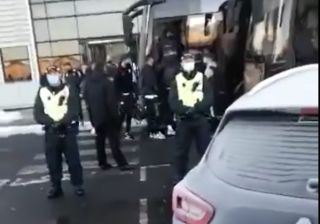 Every manager will attempt to shy away from the term “must win”, but there’s no doubt that Celtic have to win at Ibrox today if they want to keep their hopes of winning ten straight titles alive.

They’ve looked subdued all season and their performance in the loss to Rangers was particularly poor when they played at an empty Celtic Park earlier in the season, so it will be interesting to see what the tempo is like today.

READ MORE: It’s not a ‘must not lose’ encounter, for Celtic today is a ‘Just Win Game’

Rangers have crushed pretty much everyone home and away so they’ll go into this full of confidence, while Celtic still look poor at the back so they have to be considered as the underdogs today.

Their supporters won’t be able to do much to help them on the pitch today, but a few turned up at the team hotel to give them a send-off as they got on the bus for the short journey across the city: