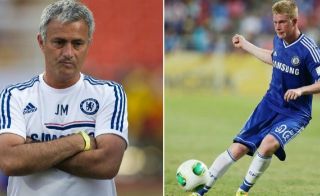 Chelsea fans are understandably furious at their former manager Jose Mourinho right now, with Kevin De Bruyne having an excellent game against the Blues for Manchester City.

The Belgian has often come back to haunt his old club, and it’s remarkable to think that Mourinho barely gave him any first-team opportunities when they were together at Stamford Bridge.

This eventually led Mourinho to sell De Bruyne to Wolfsburg on the cheap, despite him clearly looking a promising young talent at the time.

It wasn’t too long before Man City noticed how good he was and spent big to bring him back to the Premier League.

The rest, as they say, is history, and Chelsea fans are now venting their anger at Mourinho for this major transfer blunder…

I still can't believe we let Kevin De Bruyne go. I will never forgive Mourinho for making it happen.

I still can't believe we let Kevin De Bruyne go. I will never forgive Mourinho for making it happen.