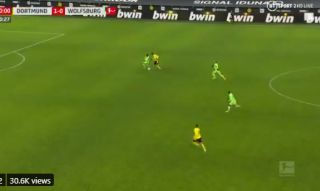 Jadon Sancho showed his quality with a delightful solo effort for Borussia Dortmund against Wolfsburg today.

Dortmund move up to fourth and Jadon Sancho has hist first Bundesliga goal of the season ? pic.twitter.com/IUpcck1gIV

This was much more like the Sancho we’ve come to know and love, but earlier in the game he missed an absolute sitter from close range.

Dortmund will be relieved he put the miss behind him and got the goal that wrapped up the three points today.