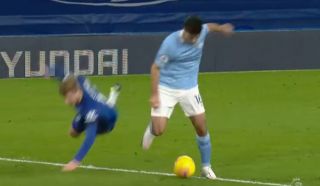 Most games will offer you a moment where the outcome could’ve been different if that moment went differently, and that came with an early penalty shout for Timo Werner for Chelsea against Man City.

City are now 2-0 up and appear to be coasting towards victory, but Chelsea will feel they should’ve had a penalty here:

It’s the kind of foul that’s given all day long if Werner is in his own half or going towards the corner flag, so that does mean it needs to be given if it’s in the box too.

Clearly the ref didn’t want to give it and there’s not enough for VAR to step in an overturn it, but this is a moment that Frank Lampard may want to discuss after the game.