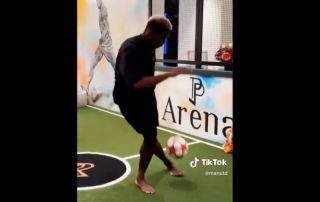 Manchester United midfielder Paul Pogba has been captured showing off some ridiculous skills on the club’s official social media channels.

Pogba, 27, is currently enjoying some of his best form in a United shirt and is slowly beginning to remind fans why they paid such a hefty fee for him four-years ago.

As Pogba and his United team mates continue to cement themselves as genuine title contenders, the 27-year-old midfielder has been snapped enjoying some down-time.

Ahead of the Red Devils’ next crucial set of fixtures which include facing both Manchester City and Liverpool, Pogba was recorded showing off some brilliant skills.