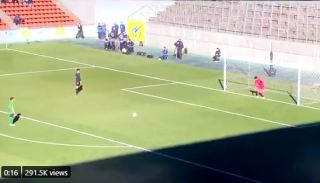 Komi Ryota is not exactly a big name in the world of football, but he’s become a bit of a viral hit after a bizarre and risky penalty run-up technique paid off for him in this Japan High School  Championship game.

Watch below as he takes ages over his run-up, doing a crazy amount of little steps on his way to eventually striking the ball into the back of the net…

If you thought Simone Zaza's penalty run-up was excessive, then you need to see Komi Ryota taking the mick at the All-Japan High School Championship. Imagine if he missed… pic.twitter.com/uB6cUiBcxm

It’s almost reminiscent of the Jordan Henderson ‘shuffle’ that the Liverpool captain has become known for doing just before he lifts a trophy – except this one takes a lot longer!

It would’ve been embarrassing to miss after this, but fair play to the guy, he made it work.