Has Chelsea defender Andreas Christensen been unfairly vilified in wake of the Blues’ stalemate with Aston Villa days before their loss to Manchester City?

Chelsea were held to a 1-1 draw with Villa a week today, yet another negative result in the midst of this torrid run for manager Frank Lampard, with the pressure being ramped up even further by defeat to Manchester City.

The Blues took the lead in that game through Olivier Giroud, but Villa struck back in the second period after defender Andreas Christensen was caught high upfield in a collision with Jack Grealish.

Villa played on with Christensen on the turf, with one fan calling out club legend John Terry on Instagram for the visitors’ unsportsmanlike behaviour. Terry acts as assistant for Dean Smith at Villa Park.

Terry was clearly not keen to entertain the notion that Villa’s actions were unsportsmanlike, rather that Christensen simply should have got to his feet after the challenge and returned to defend the attack. 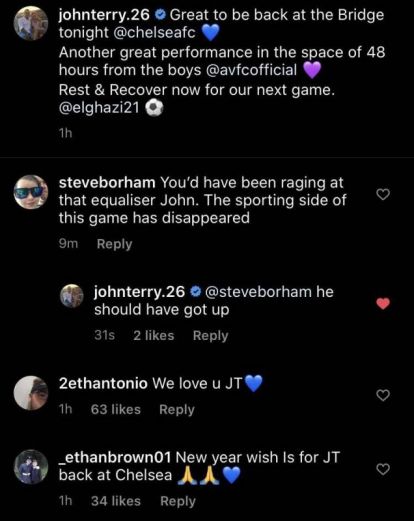 New information provided by Goal reporter Nizaar Kinsella suggests that JT may have being a little harsh on poor Andreas, though, who appeared to be left with lasting damage in wake of the game.

Interestingly, Andreas Christensen had a scan on his knee a few days ago after the collision with Jack Grealish. He played through the pain for the last part of the match. It might put some of the analysis on his performance in a new light… #CFC https://t.co/Seq2pcuiYT

The question that ought to be asked, though, is would Terry have got up? We all know the answer, but his levels of grit and determination are perhaps too high to consider the benchmark.