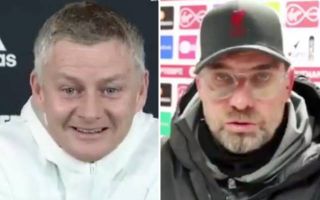 Klopp was evidently hurting after the loss at St. Mary’s, with the wounds still fresh when he faced questions from the media after the game.

As Sky Sports report, Klopp brought up the fact that United have been awarded considerably more penalties than Liverpool in recent times.

It did seem like a bit of a misplaced observation, with the timing of it only reflecting badly on Klopp, who could be accused of being bitter in defeat.

Speaking ahead of Manchester United’s Carabao Cup semi-final clash with Manchester City on Wednesday night, Solskjaer was, predictably, quizzed on these comments, and here’s his response…

?? “Maybe it is a way of influencing referees?”

Solskjaer has taken it quite well, credit to him, but does question why managers say these things in the public eye, suggesting that it could be an attempt to influence the officials.

Whether Klopp had those intentions when making these comments is something only he would know – but in fairness, he just sounded like an angry, frustrated manager speaking soon after watching his team lose.