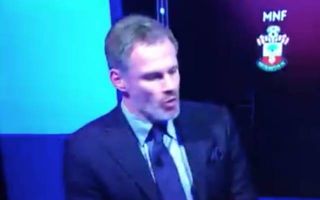 Jamie Carragher is no stranger to producing noises you wouldn’t deem ordinary – that’s the scouser in him – but one that he made on MNF last night teetered on the boundary of bizarre.

Carragher’s superb punditry and analysis since joining Sky Sports has seen him form a superstar partnership with Gary Neville on the channel’s Monday Night Football show.

While Neville was not present last night for Liverpool’s defeat at Southampton, much to his dismay no doubt, Carragher was on hand to provide the entertainment, albeit unintentionally.

Mid-sentence, Carragher made a noise when he paused to think which was nothing like any we’ve heard him make before, and it didn’t go unnoticed by viewers.

Have a look at the clip below, posted by one viewer who clearly found Carragher’s inexplicable mishap pretty hilarious – as you can hear, with him completely unable to hold back his laughter as he films the TV screen with his phone.

That noise @Carra23 has just made has killed me ??? #SOULIV pic.twitter.com/cf9YZ52ZWd