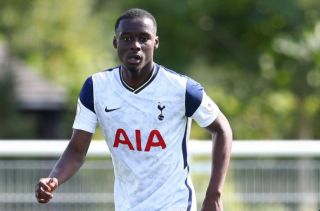 Sometimes a loan spell can feel like the beginning of an end for a young player if their contract is running down, but this looks like a different case for Spurs defender Jubril Okedina.

The 20 year old can play at right back or in the centre and he’s been the captain of the U23 squad so far this season, but he’ll now get the chance to test himself at the senior level after agreeing to a loan spell with Cambridge United:

Defender Jubril Okedina has signed a new contract with the Club until 2022 and joined League Two side @CambridgeUtdFC on loan for the remainder of the season.

He was due to be out of contract at the end of this season so it wasn’t clear what his Spurs future would look like, but it now looks more secure after a report confirmed that he had signed a contract extension before he agreed to the loan spell.

READ MORE: Eriksen or Alli? Who will Poch take to PSG?

Jose Mourinho tends to ignore the younger players but he has shown he’ll trust the occasional one if they impress and show the desired mentality in training, so hopefully he excels for Cambridge and comes back to Spurs in the summer with a chance to push for a first team spot.