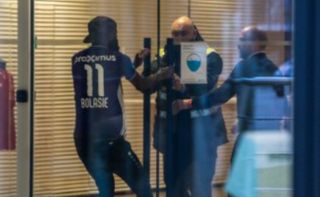 You always get one story every transfer window where a player tries to take their future into their own hands, but this could genuinely be up there with Peter Odemwingie getting in his car and driving to QPR.

Antwerp striker Didier Lamkel Ze probably hasn’t played as much as he would like this season so it’s easy to see why a transfer might appeal to him, but he can’t be doing this:

Sitting here this morning admiring the pettiness of Royal Antwerp forward Didier Lamkel Zé showing up to training in a rival Anderlecht shirt as he tries to force a move to Panathinaikos.

Of course they didn’t let him in. pic.twitter.com/cp2mnHzIs8

The fact that the Anderlecht shirt has Bolasie on the back isn’t even close to being the maddest thing about this, especially when you consider this is the equivalent of a Celtic player turning up in a Rangers top, an Arsenal player wearing a Spurs shirt or a Real Madrid star wearing a Barca kit to training etc.

It’s got worse for the striker after it was confirmed that he’s issued a grovelling apology where he’s spoken about his love for the club and the fans, but that’s surely a case of too little too late.

It’s likely that he will get his wish with a transfer after this stunt, but it will be tough to erase this horrific episode from his legacy.