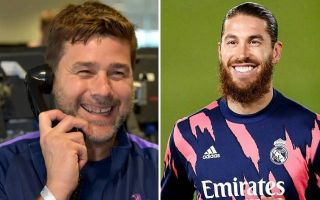 Todo Fichajes have provided an update on PSG’s negotiations with Real Madrid defender Sergio Ramos – and if they’ve got this one right – it looks as though the Spanish icon is on the move.

Ramos needs no introduction. He’s one of the best centre-backs ever to grace the game and as of recently stands alone as Spain’s record all-time appearance maker with an incredible tally of 178.

Though he has enjoyed a glistening career at the Santiago Bernabeu, all good things must come to an end, with Ramos now being 34-years-old and not getting any younger.

MORE: ‘I Am Told That We Are Going to Make a Big Team With Messi and Me’ – Real Madrid Defender Reveals the Interest From PSG

Todo Fichajes report that the Parc des Princes could be his next destination, with PSG thought top be in advanced negotiations with Ramos over a move that would take place at the end of the season when his contract with Real Madrid is due to expire.

Their report claims that new manager Mauricio Pochettino rang Ramos last week and convinced him of the value of moving to Paris and working under him. This move now appears as though it’s merely a matter of time, or so Todo Fichajes are led to believe.