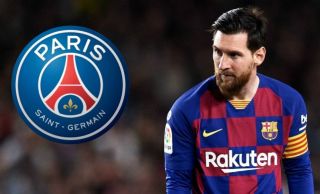 It promises to be the bidding war of the summer as clubs begin to position themselves to take advantage of Lionel Messi’s contract situation.

Barcelona’s captain is already able to talk to any interested parties, with his contract running out at the end of this season and effectively making him a free agent.

Any new president that’s elected by the club at the end of this month will have their work cut out to keep their best-ever star, because he’ll have no shortage of admirers.

It’s known that Manchester City are keen to reunite him with Pep Guardiola, and with the possible carrot of finishing his career at New York City, it’s a move that could appeal given that the Argentinian has hinted at looking to give MLS a try before he hangs up his boots.

However, according to todofichajes and cited by the Daily Star, new Paris Saint-Germain manager, Mauricio Pochettino, has come up with a viable alternative.

If Messi can be tempted to Paris, they will include a ‘golden retirement’ clause in his contract which will see him end his playing days at David Beckham’s Inter Miami outfit.

The Daily Star suggest that Beckham remains on good terms with the PSG hierarchy, and so the ball is very much now in Messi’s court.