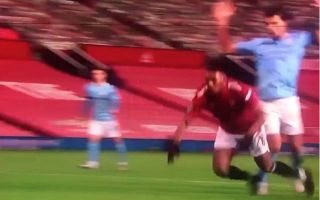 Anthony Martial, hang your head in shame. The Manchester United forward shamelessly attempted to fool the match officials with a blatant dive in tonight’s derby.

Martial struggled to make any sort of impact in the first hour and a bit of tonight’s Carabao Cup semi-final. It appears to have left the Frenchman desperate, with Martial blatantly chucking himself to the ground under absolutely no contact in the Man City penalty area.

Manchester United have been inundated with penalties of late, so perhaps it’s not naive of Martial to try his luck, but still, especially with VAR in operation, this is just ridiculous.

In a game which will likely have some of the biggest viewing figures we’ve seen this season to date, with it being both the Manchester derby and the only game involving Premier League sides on tonight, Martial has just embarrassed himself in front of the nation.

Look at the nature in which Martial fell without being touched by an opponent, an act of shameless cheating that was, thankfully, seen by referee Martin Atkinson, even if he did opt against brandishing a yellow card for simulation.

Now time for Martial to dive@ManUtd
VAR should have checked this dive pic.twitter.com/VH9wlaQLYV