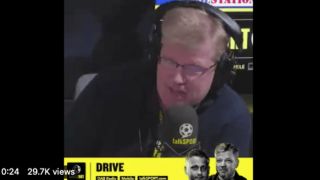 With Liverpool dropping points in the Premier League left, right and centre, it was only a matter of time before Jurgen Klopp came up with another set of excuses for why his team aren’t playing well.

First it was the 12.30pm kick-offs on a Saturday, and now he’s taken a swipe at the match officials by suggesting that Man United’s frequency of penalty kicks far exceeds Liverpool’s own. The inference was clear.

No wonder talkSPORT’s Adrian Durham took him to task over it.

“It was quite sad that he’s brought it up, because they’re now dropping points.”

“It’s beneath Jurgen Klopp, and it just proves that he is a little bit rattled!” ?