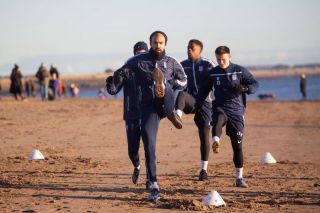 There has been so much controversy surrounding Celtic’s trip to Dubai at present. Not only did Nicola Sturgeon call for an investigation, which the SFA subsequently refused due to the Scottish government granting permission for the trip, but images emerged of players and management drinking pints of lager at poolside… all the while Celtic sit 19 points behind Rangers in the SPFL title race.

Another Scottish club has decided to undertake a bit of beach training of a different kind. Indeed, Championship Dundee tweeted:

Some Celtic fans saw the funny side, by drawing comparions to their club’s trip to the beach resort of Dubai.

But but but…@NicolaSturgeon saw photos of Celtic that raised questions….here are Dundee training next to public on a beach

All fun and games until someone falls on a jellyfish

Jonathan Afolabi’s Celtic team-mates off in Dubai right now. Meanwhile Dundee train down at the beach