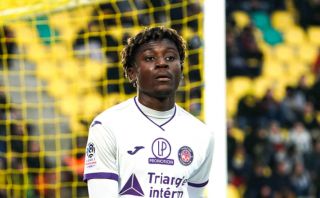 While Man United fans may be looking for big-name signings to help their title push in the second half of the season, it still looks like signing younger talents will be their main focus.

Amad Diallo has now been confirmed and reports from France had indicated that Toulouse wonderkid Kouadio Kone was next on their list.

The 19 year old midfielder has benefitted from Toulouse dropping into Ligue 2 as he’s managed to cement himself as a regular member of their starting line-up, while he’s also represented France at youth level too.

He certainly fits the profile of player that United have been bringing into the club recently, but a more recent report from L’Equipe via Get Football News France suggests they’ve missed out on signing him.

Borussia Mönchengladbach are one step away from signing ‘Manu’ Kone from Toulouse, confirmed.

€9m bid set to be accepted and personal terms agreed. AC Milan were offering €5m+add ons. Last details and the deal will be done with ‘Gladbach. ??? #transfers

They state that AC Milan were one of the teams who had made an offer of around €5m to bring him in, but it’s actually Borussia Monchengladbach who have won the race after getting closest to Toulouse’s valuation of €10m.

They go on to state that the player had agreed a long term deal with the Bundesliga side and the player will be joining a couple of French players who have developed in Thuram and Plea, so time will tell if Kone is good enough to follow in their footsteps.