Barry Ferguson reckons that Celtic will go unbeaten for the rest of the season, but Rangers will still come out on top in the title race.

The ‘Gers are 19 points clear of Celtic at the half-way stage of the league campaign, after grinding out a 1-0 win on derby day, although the Hoops have three games in hand.

MORE: The strange comparison between Juventus and Celtic

Celtic were the better of the two sides last weekend, but couldn’t make their dominance count as Nir Bitton’s sending off turned the game on its head after an hour, and Callum McGregor’s own goal sealed victory for the home side, who didn’t register a single shot on target.

Rangers legend, Barry Ferguson, thinks that Celtic will be full of confidence after their performance at Ibrox and believes that Neil Lennon has finally found a formula that works for his side. Indeed, the emergence of Soro, Turnbull and Griffiths within a 4-4-2 system has seen a huge upturn in performances and results.

Ferguson doesn’t think Celtic will drop any more points the rest of the way, but has tipped his former side to come out on top if they can get through January without any hiccups.

Rangers face a tough month with away trips to Aberdeen and Hibs, whilst they visit Livingston on a notoriously difficult artificial pitch just a few days after their Europa League second leg against Antwerp.

Ferguson told Go Radio: “If Rangers can come through this month of January unscathed I think they will be in poll position to get the title. On the other hand, I don’t think Celtic will drop any more points. I do. I honestly think they will have got so much confidence from that performance (against Rangers) with the new players coming in and a new formation.

“He’s (Neil Lennon) found a new formula that looks very good on the eye. I think that’s the best I have seen Celtic play. It’s up to the manager and the experienced guys there to say ‘we can compete and put one over on Rangers in terms of performance’ and you seen that in the first 60 minutes.

“The only thing that Celtic couldn’t do and that was down to one guy, Allan McGregor who made some fantastic saves.

“The ball is in Rangers court, of course it is, but this is a massive month and it’s not something Rangers have been used to.” 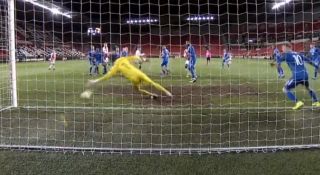 Video: Allan McGregor makes an unbelievable save in the final stages to ensure Rangers draw 1-1 in Prague March 11, 2021 20:04
Rangers FC