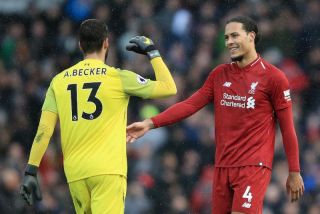 The agent of Liverpool goalkeeper Alisson Becker has revealed just how close the world-class shot-stopper came to joining Real Madrid before eventually teaming up with Jurgen Klopp.

Alisson, 28, joined Liverpool in 2018 after departing AS Roma in a deal worth an eye-watering £56.25m, as per Transfermarkt.

Since joining the Reds, Alisson’s impact has helped reignite the red half of Merseyside as a top force in England’s top-flight.

With the help of team-mate Virgil Van Dijk, the commanding Brazilian goalkeeper has had a profound effect on reforming his side’s defensive line.

After featuring in 106 matches in all competitions for Liverpool, the 28-year-old has already kept 50 clean sheets.

However, despite his hugely successful two-year spell at Liverpool which has seen the South American lift the Champions League and the Premier League, Alisson was not always destined to play in red.

According to the star’s agent Fabrizio de Vecchi, Alisson was a serious target for La Liga giants Real Madrid and came agonisingly close to joining them prior to joining Liverpool.

Speaking to outlet AS, de Vecchi said: “It will seem strange, but I have a lot of affection for a signing that in the end could not be: that of Alisson to Real Madrid.

“The goalkeeper was already playing for Roma, where Walter Sabatini took him, and Ernesto Bronzetti, my mentor, had recently died.

“I would have loved to close that operation: the truth is that I was very close to achieving it.

“Everyone knows that Ernesto carried out many operations between Giallorossi and Madrid: it would have been a nice way to remember him.”

After missing out on Liverpool’s Alisson in 2018, Real Madrid eventually went on to sign Thibaut Courtois from Chelsea for £31.5m.