Damien Duff has informed the Football Association of Ireland that he is stepping down from his role as coach with the Republic of Ireland team.

The news has immediately been met with some Celtic fans calling for the Irishman to return to the club.

Duff was a first team coach at Celtic last season and was a hugely popular figure with the players. Working alongside Neil Lennon and John Kennedy, Duff was brought in to assist the management team when they stepped in to pick up the pieces after Brendan Rodgers left the club in dramatic circumstances in February 2019.

But with a young family back in Dublin, the former Blackburn and Chelsea winger, headed back home at the end of last season and took up a coaching role with the Irish National side.

MORE: Neil Lennon hits back at Dubai critics and claims league title race is not over

Celtic fans have been scratching their heads as to what has changed this season. The Hoops are toiling in the title race and sit 19 points behind Rangers. Some supporters have suggested that the difference could be the absence of Damien Duff. Indeed, he played football at the highest level and earned the respect of the squad, whilst he also used to participate in training himself and do a lot of 1-to-1 work with wide players. His replacement, Gavin Strachan, was a journeyman as a player, by his own admission, meaning some pin the blame on this change of personnel.

Speaking in the summer Duff explained his exit from dream job at Celtic. “I’m absolutely gutted, devastated to be leaving, especially at this time, when we’re going for 10,” the former Irish international star said, as reported by Daily Record.

“It was absolutely a family decision. There is no job in the world that would have taken me away from the role I was in. I’d love to be a brilliant coach one day, but I think it’s more important at the minute that I’m just a brilliant dad, I guess.

“For the first while I was away, my kids were like, ‘Daddy, Daddy, stay for nine and 10’, but as time went by, it was more, ‘Daddy, Daddy, when are you coming home?’ Celtic is one big family, but my family is here as well. 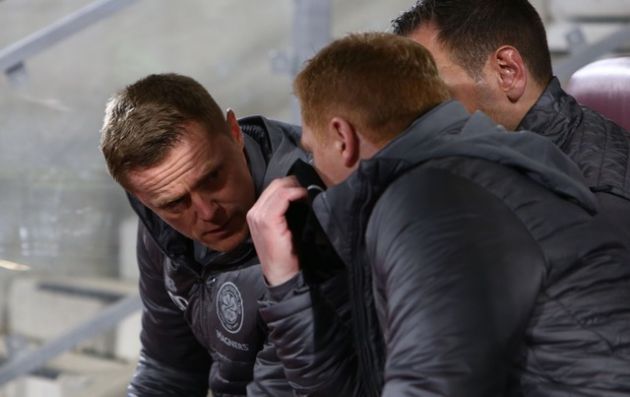 “It was the best year-and-a-half of my sporting life, and I include my football career in that. It was an absolute dream with amazing people. I’m gutted, but my kids need me, which is always the most important thing to any dad.

“It was one big rollercoaster and me leaving was one big catch 22, but it was an amazing 18 months working with great staff. The gaffer is the best in Scotland. John Kennedy is the best assistant manager around – I’ve worked with many coaches in my life, but John is one of the best coaches in the world, without a doubt. It’s been amazing learning off him, and Stevie Woods as well, he’s well-respected all around the world and a world-class coach.

“Align that with the players. The players are the best group in the country, amazing characters, amazing talent. The likes of Brown, McGregor, working with them day-in, day-out, that was a dream. It’s all in a good place, and I’ll definitely be back as a fan, hopefully to celebrate, at the end of this season if not before.

“I’d never really planned out a coaching career. When you retire it can be quite a scary time, so I thought I’d try my hand at my coaching badges, and from there everything happened a lot quicker than I would have thought. In the space of three to four months, I went from coaching 15-year-olds at Shamrock Rovers to being on the sidelines at Tyencastle.

“Like anything in life, I guess I got there because of hard work, 24/7, I was the same as a player. It was amazing, and listen, I’ll be watching every game here from home. Like most Irish people, I was always a Celtic fan before all of this, and now having been in there, loving the guys so much, I’ll be keeping tabs from afar every game on the TV.

“It was great to get a few trophies along the way, in such a short time, and it was an absolute rollercoaster. Working with top people, it was great and amazing learning experience.”

Duff was a popular man at Celtic Park, who had been spotted visiting the ground as a fan in previous years. Within minutes of the announcement that he is to depart the Republic of Ireland set up, several Celtic supporters commented ‘bring him home.’ Given the reasons for his departure, a return seems unlikely, but perhaps he could lend his expertise on a short term basis to see if he could help the Hoops rediscover their mojo and win all 19 remaining league matches. Such results could be enough to deliver that magical ten in a row that Scottish football fans seem to crave.

Right celtic get him home rapid

Back you come Damien Bhoy ?

Come home ? we need you more than ever