With training ground outbreaks of coronavirus now becoming a common occurrence, it wouldn’t be a surprise to see football taking a break in the foreseeable future.

We’re led to believe that the new Covid-19 variant in particular is spreading like wildfire amongst the general public, however, if the English Football League players who are continuously flouting the protocols wanted a reality check regarding the current situation, now they’ve got one.

MORE: What a terrible piece of business from Chelsea

According to the Daily Mail, the amount of positive tests being returned from players in the Championship and Leagues One and Two is 50% higher than those from the general public.

It’s surely with that in mind that new protocols are being swiftly brought in.

With immediate effect, players will no longer be able to hug when celebrating a goal, shake hands or swap shirts.

Unless they’re warming up on the sidelines, subs will now be required to wear masks at all times and, for training sessions, players must turn up and leave in their training kits and won’t be allowed to shower unless they live more than an hour away from the training ground.

A raft of other measures will also be introduced for their Premier League counterparts.

Despite public reservations, digital Covid passports will be quickest route to fans back inside stadiums in large numbers April 9, 2021 11:22

Fans could be back inside stadiums before season’s end thanks to Government’s Covid passport scheme April 2, 2021 10:02

Premier League tell club captains they must help ensure that Covid-19 protocols are adhered to or face punishment January 15, 2021 9:23 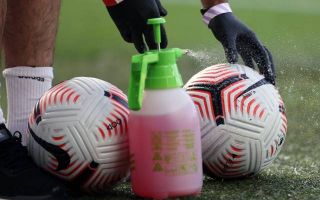