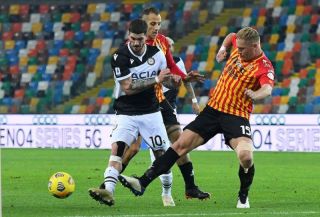 Football journalist Fabrizio Romano has given Leeds United fans an update regarding their pursuit of Udinese forward Rodrigo de Paul.

De Paul, 26, joined Udinese in 2016 after making a £2.7m switch from Valencia, as per Transfermarkt.

Since his arrival four-years ago, the talented Argentinian striker has racked up 56 goal contributions in 163 matches, in all competitions.

Despite de Paul’s contract with Udinese not set to expire until 2024, according to recent reports, there are suggestions that the forward has emerged as a transfer target for Marcelo Bielsa.

Speaking about de Paul’s links to Leeds United, journalist Romano has offered an update on the striker’s situation claiming that he will only be allowed to leave on a permanent deal.

When asked in an exclusive interview with GiveMeSport, Romano revealed that Udinese have put a £36m price-tag on their marksman and will not be open to letting him leave on loan.

“De Paul is €40 million (£36.05 million) or nothing,” Romano confirmed (as quoted by HITC). “I think it is really, really difficult. Impossible (he will go out on loan). Udinese won’t send him on loan.”

Leeds United currently only really have Patrick Bamford as an established first-team number nine at their disposal and whilst the English forward in in decent form, surely the chance to land de Paul won’t be passed up by the Whites’ hierarchy.