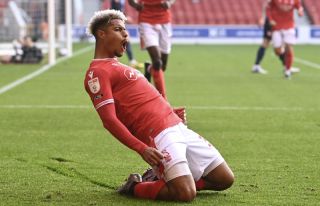 Taylor, 30, was back in action on the weekend after his side faced-off against Cardiff City in the FA Cup.

The experienced English forward’s only goal of the game helped secure Forest’s place in the illustrious competition’s Fourth Round.

However, speaking to BBC Radio Nottingham (as quoted by Nottinghamshire Live) after Saturday’s match, Taylor’s focus was less on the match and more on the topical subject of BLM and ‘taking the knee’.

BLM has become one of the most talked about subjects since the death of George Floyd on the lead up the US Elections prompted major civil unrest in the States.

However, in an attempt to reiterate our country’s anti-racism stance, British football has adopted a gesture synonymous with the BLM movement; taking the knee.

In a show of support, footballers, coaches, media crews and officials have all been going down on one knee for a few seconds prior to each elite-level match’s kick-off.

However, of course, like most aspects of life, the conversations surrounding whether or not taking the knee should have been allowed or be allowed to continue wages on.

Nottingham Forest’s Taylor has issued a remarkable personal statement regarding his feelings on the movement as well as his thoughts on taking the knee, which he feels has been ‘diluted beyond belief’.

“My support for what is that we’re trying to achieve is absolute, but I do not support Black Live Matter as an institution or organisation,” the 30-year-old said. “I would request anyone looks into Black Lives Matter to look into what that organisation does and what they stand for because it’s scandalous that the world and the world’s media has got behind Black Lives Matter.”

“Not the message; of course black lives matter. [But] standing behind Black Lives Matter and all the institutions that have done that – the BBC, Sky, all of them saying Black Lives Matter – it’s not a good idea because of what the organisation stands for.

“The message overall is 100% important, don’t get me wrong on that… In terms of black lives actually mattering and black people being killed by police more frequently, that’s not a good thing.

“Black lives do matter, but you’ll never hear me say Black Lives Matter again in reference to that company.”

In response to Taylor’s comments, fans have taken to their social media to give their thoughts.

If a white man says this, he’s seen as racist …

?? at last, someone with the bottle to speak out.

Good for you lad,Middlesbrough fc don’t take the knee either

Fair comments, I believe Britt Assombalonga has a similar viewpoint. I still support BLM personally, but on reflection I now have a clearer view of why the campaign has been opposed so thanks for helping me understand.

Will we be hearing Taylor’s thoughts on the Malthusian theory next week? Or supply side economics ? I presume he’s pro both, but can’t wait to listen.

So much respect for @lyletaylor90 . One of the very few footballers with the balls to come out and say all this

An interesting interpretation and one I concur with. All entitled to an opinion. Unfortunately those in power with an opposing view can make life very difficult. As for most things I suppose.