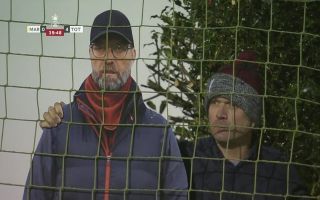 Liverpool fans and Merseysiders will absolutely love to see that Reds boss Jurgen Klopp came along to watch Tottenham Hotspur’s FA Cup tie against Marine, via a cardboard cutout.

With 8th tier side Marine’s home stadium located amongst houses, one local resident that stepped out to watch the encounter brought along a cardboard cutout of Klopp.

The hilarious thing is that this isn’t some amateur novelty time, the image chosen is a trademark death that’s often fixed on the German’s face whilst he’s on the sidelines – and it’s even life-sized.

Pictures from Match of the Day and the FA Cup.

For those who may think this is strange, it can be easily explained, Marine are a lower-league club that are based in the Crosby area of Merseyside, hence the man sporting a Liverpool beanie being present.