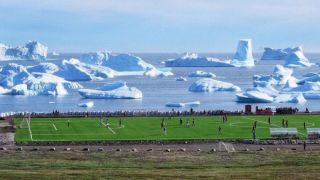 Greenlandic Football might not be renowned for its quality or its prestige, but it certainly catches the eye in terms of the beautiful scenery next to some of its pitches!

Greenland’s national league is not part of FIFA and is often called an unusual and unique tournament as the Coca-Cola GM, as it is named, lasts for only one week. This is due to football clubs being so far apart in the large country. The competition is hosted in several different locations in Greenland. These locations include Ammassalik, Nanortalik and Kangaatsiaq.

But what a privilege that week must be for players, if these pictures are anything to go by!