According to the brilliant Richard Jolly, a journalist who is constantly responsible for sharing the best stats around, Ryan Fraser has achieved an unwanted record with his sending off for Newcastle today.

Fraser did not learn his lesson just minutes after seeing a yellow card for hacking down John Fleck in a 50/50 duel, as he was sent off the Magpies in the 44th minute against nailed-on relegation candidates.

The Scotland international saw his second yellow card of the game – and resulting sending off – for recklessly kicking into David McGoldrick as the striker passed the ball away.

Jolly now reports that Fraser has become the shortest player to ever be sent off in Premier League history, replacing a feat set by Brighton ace Tariq Lamptey towards the end of last November.

Fraser stands at 5ft4, with Lamptey an inch taller than the winger.

Ryan Fraser becomes the shortest player ever to be sent off in the Premier League, replacing Tariq Lamptey.

With Fraser already the shortest player at a top-flight club that actually features regularly, it’s fair to assume that this record may never be broken – especially considering the ever-increasing importance of physical attributes for players in world football and notably the Premier League. 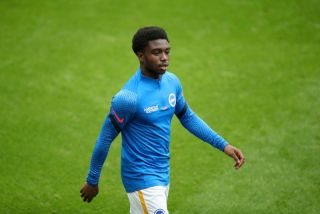