While there isn’t a lot of talk about Man United making any big moves this month, it does look like they could continue to ship out a few of the fringe players who aren’t getting regular chances in the team.

Timothy Fosu-Mensah has had a stop-start career due to injuries and changes in circumstances, but it appears that he’s getting a chance for a permanent deal in Germany with Bayer Levekusen:

With the medical completed and the total agreement of terms with Man United it appears that it’s only a matter of time before this is officially announced.

The Dutch defender turned 23 earlier in the month so the time had probably come for him to move on and look to establish himself somewhere else, while it was also clear that he wasn’t ever going to be a regular starter at Old Trafford.

He’s still a bit raw but he’s a solid defender who has pace and some ability on the ball so he could be moulded into a top quality player if he’s given time and the opportunity to develop, so it will be interesting to see how he gets on in Germany. 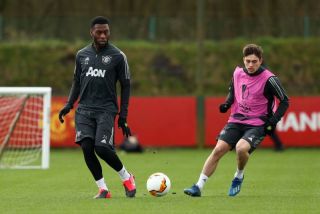