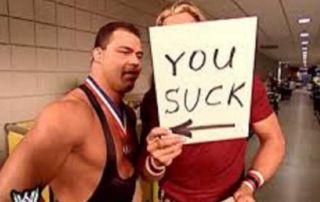 Clearly there are genuine wrestling fans who really enjoy the technical parts, but most of us used to love the WWE/WWF in the 90’s for the dramatic entrances and the inevitable steel chair.

There are several entrances that will live long in the memory as they always invoke chills – Stone Cold Steve Austin’s glass smashing is always welcome, The Undertaker’s takes some time to get going but it’s always good and it’s hard not to like The Rock’s either.

Occasionally they will get used at sporting events to hype things up, but there was something incredibly weird about Arsenal using Kurt Angle’s cheesy theme tune for the second half last night.

Angle himself has actually responded to this, and he’s wonderfully managed to give Arsenal two insults here:

Arsenal using my theme song. The only thing missing, due to COVID, is 30,000 fans chanting “You Suck”. #YouSuckCovid #itstrue https://t.co/VQncpBsoin

For those fortunate enough not to get the reference the “you suck” was inserted by fans when Angle would make his entrance, but it would also be suitable for Arsenal after a drab 0-0 draw last night.

The second insult about the 30,000 fans is more of a slow burner, but The Emirates is capable of holding up to 60,700 fans so Angle either thinks Arsenal can only sell out half of their ground – or the fans are far more interested in going off to get food at half time rather than actually watching the start of the second half.