Ahead of the Spanish Super Cup final on Sunday, Barcelona won’t want to dwell too long on manager, Ronald Koeman’s record in showpieces.

The Dutchman will always be remembered fondly for the winning goal that he scored at Wembley, handing the Catalans their first-ever European Cup at the expense of Sampdoria.

However, since then he’s had mixed fortunes.

According to Sport, Koeman has played or managed in another 28 finals since the Wembley triumph, but has only been successful in 13 of them.

For a club of the stature of Barca, that’s hardly the sort of record to get Athletic Club worried, and it may even give the Basques some incentive.

It’s the first chance for the Dutchman to win any silverware as Barcelona manager, and after being unbeaten since early December, a win here would be another feather in his cap.

It would also give him the chance to put to bed – for now – any rumours of him being sacked anytime soon. 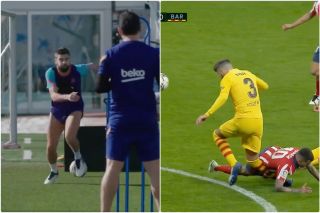