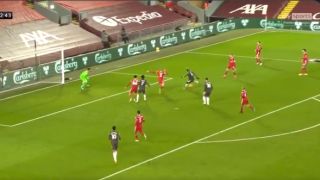 Sometimes a chance will come through luck rather than skill in a tight game, and it’s through a piece of luck that Man United should’ve gone ahead vs Liverpool.

Both sides have struggled to create anything meaningful due to a mixture of solid defending and sloppy attacking play, so it was a ricochet to Paul Pogba that gave United their best chance of the game.

He is getting closed down so he doesn’t have time to pick his spot, but all he can do is fire it right down the keepers throat and you can tell from Pogba’s reaction that he knows it’s a huge moment: