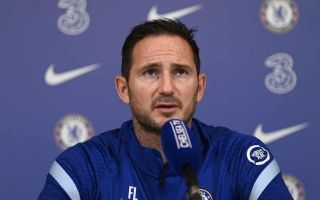 In the post-match press conference following Chelsea’s 2-0 defeat to Leicester, Frank Lampard was asked whether he feels as though ‘certain players’ are ‘letting him down’.

The Athletic’s Simon Johnson told talkSPORT today that Lampard could be sacked if the Blues were to lose to Leicester, with that now happening at the hands of his former coach Brendan Rodgers, things aren’t looking very promising for Frank at all.

Lampard insisted that it’s not for him to say whether certain players are ‘letting him down’ personally rather that there are a number of Blues stars that are ‘not playing as well as they should be’.

The Chelsea legend added that it was clear that some players were poor tonight by the result, a defeat that leaves them sitting eighth in the table as they’ve been leapfrogged by West Ham this evening.

Lampard confirmed that there are players in the team that have found themselves in a difficult ‘position’ after seeing their ‘confidence’ drop as a result of poor form.

See More: Explained: Why Jamie Vardy was not ruled offside for Leicester goal vs Chelsea in moment that’s shocked some Blues fans

Here’s what Frank Lampard had to say when asked if certain Chelsea players are ‘letting him down’ and piling onto the pressure he faces, with calls to ‘step up’… pic.twitter.com/F4gkU23QpV

“I wouldn’t say letting me down because that’s not my job to sit here and say that to you, but there are players that are not playing as well as they should be – simple fact.”

“That was clear tonight, they’re the only ones that can deal with that. I was a player for 20 years, I know that when your form’s not good there could be a multitude of reasons why confidence drops, the things you can deal with in front of you; which is how you work and train, how you prepare, how you handle setbacks – will be what define you.”

“There are players in that team for sure that are in that position.”

A dire stat also shows how poor defensively the Blues have been in the Premier League since Lampard took charge, with it abundantly clear that this side cannot move forward and challenge for major honours until they build a steady foundation at the back.

The interviewer was completely spot on when he quizzed Lampard on whether certain players need to take a ‘hard look at themselves’ and need to ‘step up’.

Whilst Chelsea are a team that consists of players that are not necessarily one that have been together for very long, the side’s massive summer spending means there’s absolutely no excuses for their woes.