Almost every big player has a story where they could’ve joined a different club in the past, so it could be interesting to revisit Man City’s interest in Amad Diallo in a few years.

The forward eventually moved to Old Trafford this month and he’s clearly highly rated, but he’s not played a lot of senior football at this point in his career so it’s hard to tell how good he could really be.

It also turns out that he was pretty close to becoming a Man City player after our colleagues at Stretty News uncovered some information about City’s interest.

It’s suggested that they were offered the chance to sign him in the summer and there was certainly some interest from City in signing him, so they took the time to extensively scout the various aspects of his game and personality.

In the end it sounds like they decided not to make the move because they feared that he lacks the physicality to cope in the Premier League, but that’s also something that can be worked on over time.

It’s far too early to start suggesting who made the right choice here as he’s yet to make any impact at Old Trafford, but City will be hoping he doesn’t turn into a top level player so they don’t end up regretting this decision.

Man United goal against Leicester City is the first time that this has happened in the Premier League since 2006 May 11 2021, 18:48
Manchester United FC 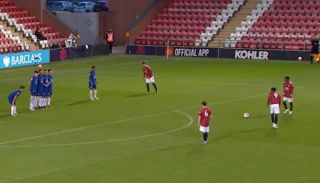