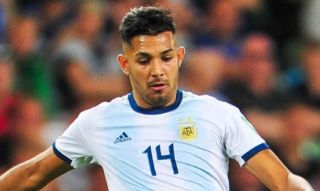 Man United’s defence has improved a bit in recent weeks despite a few shaky moments, but there’s still a feeling that they need to add some further quality to the position.

Harry Maguire has improved but he still looks easily isolated, so an obvious way to help him out would be to add a left footed option with a bit of pace to cover for him. It would also bring some balance to the back line and allow Maguire to move into the slot on the right hand side.

A report from French outlet La Voix Du Nord via Goal has indicated that United are showing some interest in Lens defender Facundo Medina, and it’s suggested they’ve even reached a point where they’re prepared to offer €15m to make the transfer happen.

Medina looks like an interesting option because he is left footed and good on the ball, but he’s also only 21 and this is his first season in Europe so he might not be ready to go straight into the first team just now.

READ MORE: Soskjaer confirms there is “no chance” that Man United star is rested despite poor showing vs Liverpool

He’s also on the shorter side for a Premier League centre back at 5″11 and his game isn’t full of aggression to make up for that, but he does have some pace and he’s now a full Argentine international so there’s also a lot to like about his game.

The step up to a side challenging for the Premier League might be too much at this point in his career so it would probably make more sense to delay the move until the summer to allow him to gain more experience, but he’s certainly an intriguing option so United fans may want to keep tabs on his form in Ligue 1 ahead of a potential transfer.

Man United’s €12m bid for talented defender would see him stay on loan for the rest of the reason Jan 20 2021, 13:33
Manchester United FC