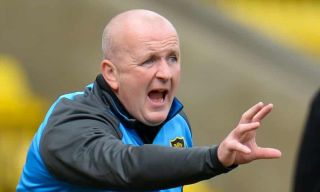 David Martindale has made a sensational start to life in management with Livingston but faces a nervous wait to discover whether he can continue in the role.

The Scottish Football Association will this week discuss whether Martindale passes a ‘fit and proper person’ test because of his criminal past. Indeed, Martindale served four years of a six-and-a-half-year sentence for drugs and money-laundering offences in 2006. However, he feels he has been rehabilitated and hopes that fact will be recognised by the game’s governing body.

Martindale, who never played professional football, told Sky Sports: “I don’t think I can say too much. They’ve got all the facts in front of them. I’ve been here before and presented my case. I’m relying on other people to allow me to do my job.

“The new act that Scottish football has come out with (Football Unites), about diversity and unity; if they are serious about trying to impact that into Scottish football, I’d be really disappointed if I was seen as not a fit and proper person.

“The world is moving on, we’re moving forward, we’re not as narrow-minded as we once were. Hopefully the Scottish FA can take that into account and let me get on with my job.”

He continued: “For the prison and court system to work, there has got to be a rehabilitation process. How do people get back into society? Do you want people falling into a vicious circle and reoffending?

“There’s a lot of employers out there, big employers, who are making statements about bringing reoffenders back into the workplace. If Scottish football is serious about being open-minded, rehabilitation should seriously be considered in that.”

Martindale won his first eight matches in charge of Livingston and has followed those victories up with two back to back draws against Celtic. It’s an incredible start to managerial life, going ten games without defeat.

His story is quite remarkable:

Martindale was a youth player with Rangers and Motherwell but by his own admission did not apply himself to make the most of his talents. Instead, his profession focused on business interests in the hospitality sector, but after a pub he owned went on fire without insurance cover he also became heavily involved in organised crime. He was arrested in April 2004 following a police operation and while awaiting trial, he enrolled at Heriot-Watt University to undertake a degree in construction project management.

Martindale was imprisoned in November 2006, serving four years (and also having around £100,000-worth of assets seized as proceeds of crime), then he completed his degree following his release.

In 2014, while employed in the construction industry, Martindale became involved with local professional club Livingston as a part-time volunteer, based on personal recommendations and following appropriate background checks. With his work initially consisting of basic training duties and ground maintenance – the club’s poor financial state at the time meant they were in need of assistance at minimal cost. His appointment was scrutinised in local press, but he gradually became more involved in coaching and recruitment during Mark Burchill’s spell as manager, and also began to study the subject formally, obtaining his UEFA B License via the Irish Football Association due to them being more accommodating to applicants with convictions than their Scottish counterparts.

Martindale was appointed assistant manager of Livingston when David Hopkin became manager in January 2016, and when Hopkin departed in May 2018 after leading the club to successive promotions from Scottish League One to the Scottish Premiership, he took temporary charge of the team. He was offered the manager’s job in the summer but turned it down due to concerns of bringing embarrassment to the club in relation to his past. Kenny Miller took the job and resigned soon after, handing the baton to Gary Holt, who kept Martindale on the staff and handed him increased responsibilities as head of football operations.

After keeping Livi in the top flight for two seasons, Holt departed a couple of months ago, and Martindale finally took the reins.

It is hoped that Livingston’s new boss, who is doing a superb job, is handed a second chance by the SFA panel. He donated his Manager of the Month trophy to a local mental health charity two days ago, and such a gesture shows that he is likely in a better place these days.