United are top of the Premier League table, a feat that is not achieved without a sturdy backline. However, we’re talking about a team that conceded six to Tottenham at home earlier in the campaign. It would be totally unwise to brush over their previous shortfalls.

As a result, it would come as no surprise if United, who are one of the Premier League’s biggest spenders, chose to invest further into their defensive line. Todo Fichajes believe that Robin Le Normand, a 24-year-old French centre-back at Real Sociedad, has emerged as a target.

The report claims that Man United have opened talks with Sociedad over the possibility of signing Le Normand, but the club only referred to his release clause, which stands at a whopping €75M – a price Todo Fichajes do not believe United are willing to pay at this point in time.

There will likely need to be compromise from both parties on Le Normand’s valuation if they are going to come to an agreement, but when there’s a will, there’s a way, and United’s interest appears to be legitimate – or so Todo Fichajes believe. 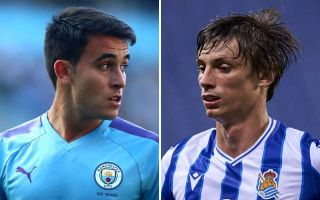