The Red Devils hit back and won the game 2-1, but that wasn’t enough to escape the wrath of Rio, who told BT Sport “It’s disappointing (Fulham’s goal). I think both centre-backs are at fault. Lookman, the most dangerous player in the whole Fulham team, they can both see him.

“The problem comes when, for some reason, Harry Maguire feels the need to get over to his left. I understand that if Shaw is going to go out to the full-back, I get that, but Shaw stays, he doesn’t go out there.

“What’s that done? It’s created a problem for the back-line, there’s a big space. For what? For Lookman to run into which he eventually does.

“My problem then lies with the other centre-back, Bailly, who doesn’t see it. He can see everything in front of him. He can see Lookman, he can see the space and he can also see his partner coming away from where the danger zone is, so he’s got a decision to make.

“He’s meant to cover, he doesn’t, his arms are out. Why are his arms out? I don’t understand why.

“There’s Lookman going. How you can not see that, react and smell the danger, it baffles me. I don’t understand, so for me, here, the two centre-backs are completely at fault.” 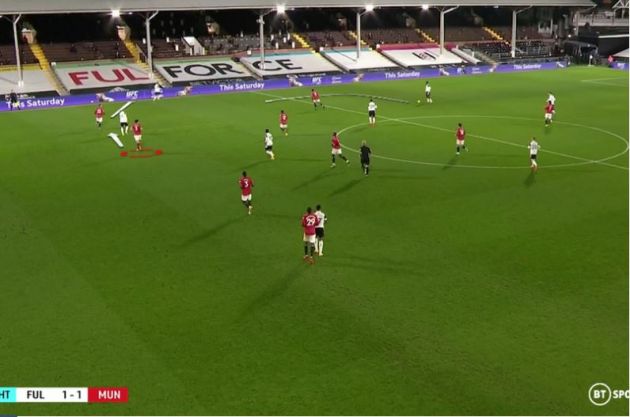 United’s victory puts them top of the table, with only Manchester City in a position to catch them due to their game in hand. The defence held firm after that first half error and recently kept a clean sheet against Liverpool. As such, the error doesn’t seem to be a long term issue.

It remains to be seen if Man Utd will be consistent enough over the course of the season to maintain their slender lead at the top of the table, which has been one of the surprise stories of the 2020/21 campaign so far.

It may be that, for now, United are only benefiting from the dip in form from their rivals, but that might not last long enough for them to remain firmly in contention for the title come May.