Barcelona’s presidential elections should’ve taken place this weekend, with Joan Laporta the firm favourite to regain the position that he lost in 2010.

It now appears likely that the elections will take place during the first week in March, and it’s difficult to see how Laporta can be beaten given that he was well out in front in voting terms for the first stage of the process.

MORE: Liverpool should be worried about this

His nearest rival, Victor Font, polled less than half of his votes, whilst the only other candidate still in the race, Toni Freixa, is an also ran.

However, there’s on such thing as a sure thing, and Laporta’s choice of manager for next season could well be the biggest mistake he’s made on the campaign trail so far.

It would be no surprise if he loses a number of votes because of it either.

According to Don Balon, Laporta wants to keep current manager, Ronald Koeman, in situ. That’s despite Barca’s worst start to a season in 50 years and an incredibly dull season for the most part so far.

The Dutchman doesn’t appear to have yet won over Barcelona’s fans even if he has the backing of Laporta.

It’s a decision that could well prove decisive, particularly with Xavi waiting in the wings for Font. 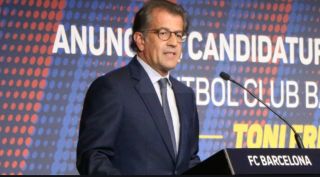